A Baby in a Bar? In Italy? That’s Just How We Roll. | MumAbroad 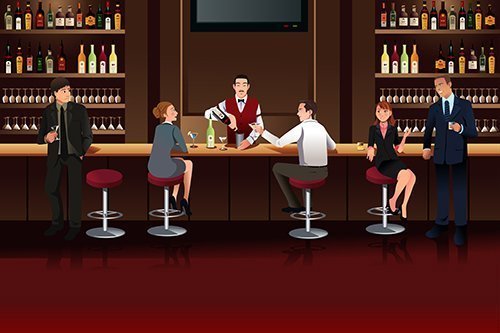 Over New Year’s, Paolo, Naomi and I spent about 10 days in Ireland and England. My husband and I both love pub culture, so we were looking forward to settling in for a few pints wherever we went. But since we don’t travel with an au pair, that would mean taking Naomi with us into pubs. Yet a little advance research clued me into the fact that for the British and Irish, it’s not normal to take kids into bars. 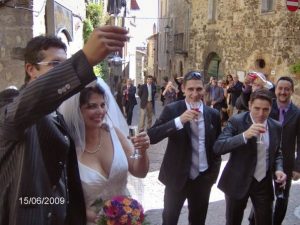 What? I suppose my shock at kids in bars not being a culture norm just goes to show how much I’ve acclimated to life in Italy. In Italy, especially, maybe, in small Italian villages like my own, the bar is not just a drinking bar. It’s not just a place to adults to go and mingle and get their drink on. And it’s certainly not a nefarious, smoke-filled den full of drunks crying in their beers (though that occasionally happens—and no, I don’t mean me!) and single hotties looking to hook up (though from what I hear, that occasionally happens, too).

In towns like ours, the bar is very much the centre of village life. It opens early in the morning and serves up cappuccinos and cornetti (croissants). It may sell newspapers, cigarettes, bus tickets, and cell phone credit. It certainly sells candy, gum, chips and soft drinks, as well as ice cream. When there’s a community dinner or a raffle, we buy our tickets at the bar. When there’s a collection taken up for some charity, memorial or other event, we tuck our change and bills into a cardboard box perched on the bar. It really is the place where everybody knows your name, for better or worse. There’s no anonymity and you cannot get away with any bad conduct, lest the whole town hear about it, including your mother.

In the late afternoon, the usual suspects roll in for their apertivi—before dinner drinks. Some of them have a lot of those and stay way past their suppertime. But the majority have a glass or two and then head home. After dinner, a younger crowd trickles in. Sometimes they’re there to get drunk but most often as not, they’re there to get out of the house, hang out with their friends, and play foosball or briscola, that baffling Italian card game. 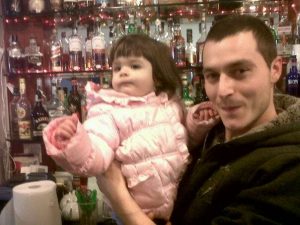 Naomi has grown up in our Allerona bar. She walks in like she owns the place, and now, at a chattering 3 years old, often demands to be taken there. “Andiamo a bar, andiamo a bar!” We often go to dinner in town, and we’ll stop in with her for a drink before dinner and then, as often as not, pass by after dinner for another. She takes it all in stride, as do the other bar patrons. They all fawn over her and usually, no sooner do we walk in before someone scoops her up and entertains her.

Hell, the bar is my babysitter! Did I really just say that? I think I did.

So picture us in Ireland and England, where bars, and evenings out in general, are the realm of adults. It was New Year’s Eve in Dublin, and we were sitting in our blah hotel room at about 9:30, trying to figure out how to kill time and stay awake until the clock struck midnight. There was a pub in the hotel (it’s most appealing feature, really), so I suggested we go down and nurse a pint or two until the New Year. We figured that worst case scenario, we’d be told that Naomi couldn’t stay in the bar, in which case she could sit in the lobby while we got our drink on in the pub.

We walked into the crowded pub, packed with New Year’s revelers and rocking to the strains of traditional Irish music. I asked the bartender if Naomi could stay and he replied, “Only if she can sing!” I signaled to Paolo that we were okay to stay, and ordered us two pints of Guinness. Okay, I’m kidding about that last part…

And then, we both started to notice The Looks. We got the stink-eye from so many different Irish women, we instantly felt like the Worst. Parents. Ever. Paolo even saw a woman elbow her husband and point. He gestured to me to make a quick exit and we took our beers to the lobby, where Naomi played and we sat, waiting for it to be midnight.

After we got back to Italy, I recounted this story to my friend and fellow blogger Toni. She reminded me of that funny scene in “Sweet Home Alabama,” when Reese Witherspoon bumps into a childhood friend:

Maybe Reese was right to be judgmental of her friend’s parenting skills, just like that elbowing and pointing Irish woman in Dublin. I probably would have judged me too, were this several years, a baby and an Italian village ago.

So next time I venture to Ireland, I’ll respect the cultural norms and keep my kid out of the pub after a certain hour. It’s really not such an outrageous rule, after all. But when it comes to our little bar in our little village, I will take no stink eye from anyone. Because in Italy, babies in bars is just how we roll…

You can read more of Elizabeth’s posts at www.myvillageinumbria.com