16 Dec A Very Catalan Christmas – The Festive Period in Barcelona

In our opinion, Christmas really is one of the most wonderful times of the year in Barcelona. From the life-sized nativity scenes dotted throughout the city’s squares to the pageantry of the Three Kings’ Parade on the evening of the 5th January, the mystery and exoticism of Barcelona at this time of year is unparalleled. Without further ado, here is our Christmas inventory of eating, drinking, keeping the children happy and staying merry in the festive season. 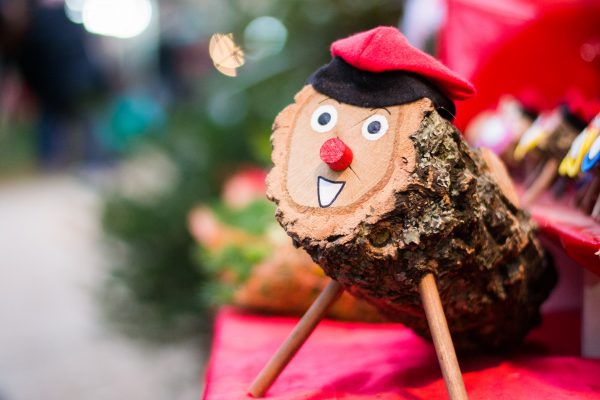 Though it may lower the tone, we mention him at the top of our list, as Catalunya’s Christmas countdown is yet to begin until one spots this curious chap peeping out from a public square or windowsill on high.

One of the region’s more obscure festive customs, the Caga Tió is a friendly wooden log with two short stumpy front legs sporting a cheeky grin and a traditional red Catalan hat. A much admired phenomenon in homes, primary schools and Christmas fairs across Catalunya, children deposit raisins and other delicious treats to “fatten him up” throughout December.

Then, when the time comes, our poor friend is then abruptly walloped with a stick (much like a piñata) whilst the children sing, until the blanket covering his posterior is lifted to unveil a pile of gifts! The Ayuntamiento de Barcelona’s official Caga Tió occupies the Plaza de la Catedral opposite the Gothic Cathedral. Expect a lengthy queue at peak times – he is mighty popular! He will be pooping treats for the under 12s during December. 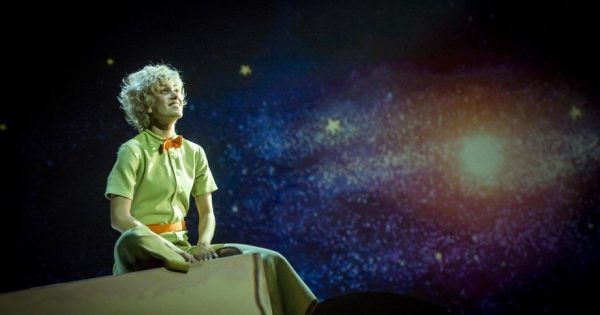 The musical El Petit Príncep returns to Barcelona for the 6th year running. Suitable for age four and up, the production combines different musical styles with the latest visual techniques. Through the use of mappings, projections and animations, the spectator is transported to different magical worlds. An aviator, crashes with his aeroplane in the middle of the Sahara desert. While he is trying to repair it, a little boy appears and asks him to draw a sheep. The author learns that The Little Prince comes from asteroid B-612 where he has left behind three volcanoes and a rose. Before reaching Earth, he has visited other planets and met some very odd people: a king, a conceited man, a drunkard, a lamplighter, a geographer…..

The show is in Catalan and running time is 90 minutes. 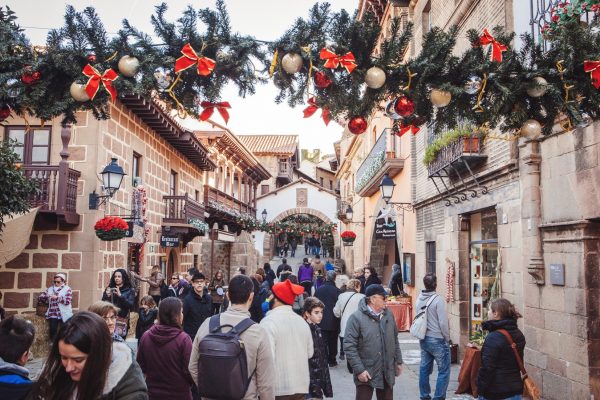 During the Christmas holidays, the complex will be decorated especially for Christmas. You will find a huge Christmas market and several living nativity scenes will be staged on 6th-8th December. There will be lots of family activities from 21st-29th December. Children will be able to deliver their Christmas list to Santa (21st-24th) or to the Three Kings(21st-29th). Children can also enjoy workshops, film screenings, a giant snowball, a treasure hunt and roller disco amongst other things.
https://www.poble-espanyol.com/en/christmas-at-poble-from-21-to-29-december/ 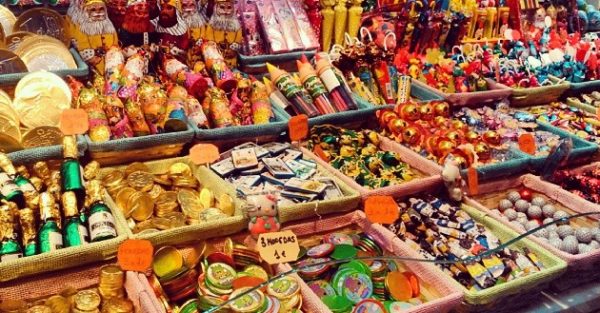 One of Barcelona’s oldest, biggest, and most bustling Christmas markets is the Fira dels Reis running from 19th December to 6th January along Gran Vía (between C/Muntaner and C/Calàbria). Originally the market only sold sweets and children’s toys. This is a perfect opportunity to enjoy the city’s traditional festive atmosphere and indulge in some yummy local treats with friends and family. There is an impressive array of local crafts, foodie products, handy for last minute Christmas gifts with a Catalan twist (try saying that fast three times). 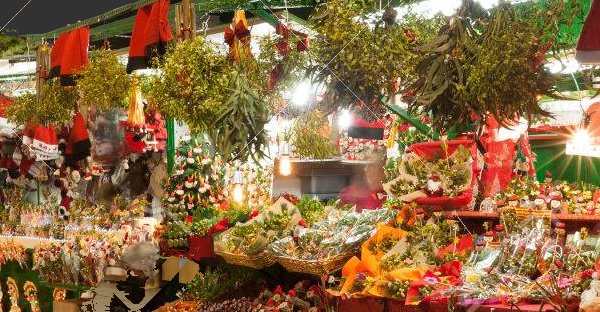 This long-established Christmas fair has taken over the vast square beneath the imposing silhouette of Barcelona’s Gothic Cathedral since 1786. You will find the largest collection of Nativity figurines for sale in Catalunya, carved and painted by artisans from across the region. Be like a local and carefully select your chosen statuettes from the comprehensive medley, which range from the classic miniature baby Jesus to the outlandish Caganer. A quintessentially Catalan figure, the Caganer is a mysterious character who squats in the corner of the nativity stable (said to bring a fertile harvest). This defecating trickster comes in many forms – from well-known footballers and politicians to a typical Catalan peasant.

From 3rd December, the Carassa de Nadal, a masked figure that walks between the stalls, spitting out sweets for children, will be strolling around the Santa Lucia Fair, carried by various popular culture groups from the city. There is no fixed route, just listen for the music of the gralles to determine its whereabouts. 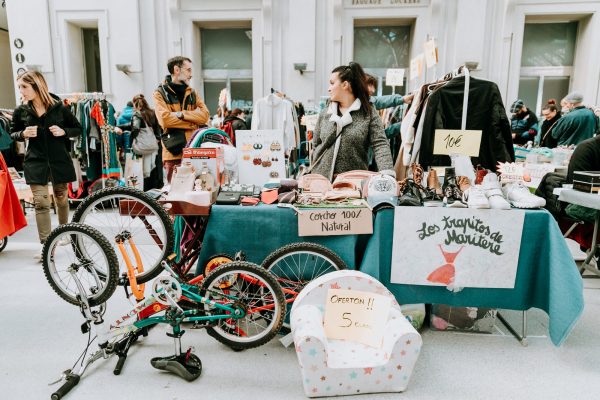 For those seeking a contemporary, upscale departure from traditional Christmas markets, Barcelona’s pop-up scene has flourished in recent years, offering a considerable evolution from the conventional gift-buying experience. One for discerning bargain hunters and old souls alike, Two Market stocks some of the most affordable second hand treasures to be found in all the land (and certainly in Barcelona – with a special “everything for one euro” deal). The philosophy is that reuse is the best way to recycle.  Visitors to the market’s special Christmas edition are sure to unearth unique nostalgic Christmas gifts with covetable deals galore. 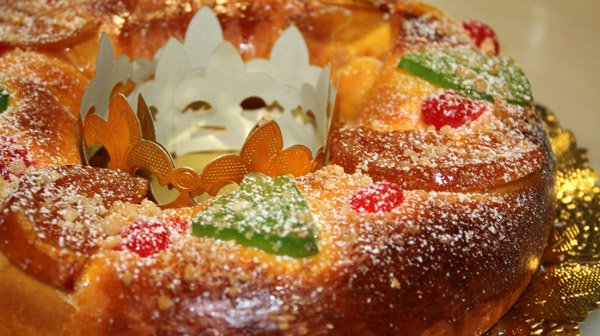 Begin with a gentle initiation and people-watch from the side-lines with a crispy glass of cava before delving into the market’s bustling aisles, narrowly avoiding dangling hams and heavy-handed housewives. Catalan abuelas jostle decisively past overwhelmed tourists, recouping their rightful turf at this time of year in order to claim the juiciest cuts of meat and most coveted ingredients. One of the more unique items changing hands at this time of year is the lesser-spotted giant Galet – a fist-sized macaroni destined to float in a warming chicken soup alongside a single (equally gigantic) homemade meatball.

Equally festive are the colourful Tortell de Reis pastries that appear in swathes prior to the three kings’ arrival. Adorning bakery windows with bursts of candied fruit colour, this glistening o-shaped brioche contains a tiny ceramic figurine of one of their majesties. The person who finds the tiny porcelain king in their slice gets to wear the accompanying paper crown (beware of chipping a tooth). Beware too cheapskates, for therein also lies a dried fava bean – the unlucky finder of which must foot the bill for the tortell!

Another must on many household menus are the three Cs – Catalan Canelones at Christmas. Barcelona’s archetypal festive fare, these hearty stuffed pasta tubes drizzled with salty béchamel are traditionally eaten on 26th December, conveniently using all the leftover Escudella, (uber-tender meat stew) from Christmas day. 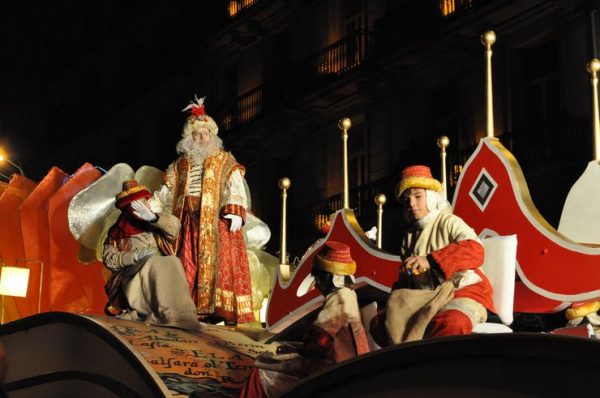 Melchior, Caspar and Balthazar and their entourage of fantastical creatures arrive at Moll de la Fusta, where the mayor of Barcelona will greet them and from there they parade through the streets of Barcelona on regal floats, throwing sweets to excited children lining the streets until their final destination at the Magic Fountain at Monjuïc.