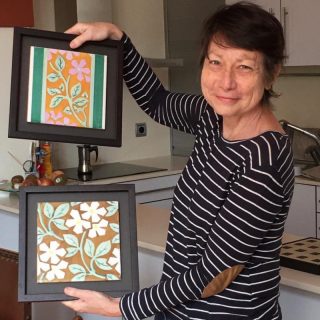 Own a piece of Barcelona!

Benedicte Bodard, owner of Mesa Bonita, arrived in Spain in 2001. Originally from France, Benedicte came to Spain after spending 18 years in Los Angeles where she worked as a wardrobe stylist in films, television and commercials. In 2001 the real estate market was undergoing a huge “boom” and people were doing major remodelling in their newly acquired apartments. Part of the remodelling sadly consisted of (and still does) removing any design characteristic that could remind them of the past. Walking through the streets of Barcelona, how could Benedicte miss the containers of debris filled with great Modernista hydraulic floor tiles? She was amazed that anyone could throw these beauties away. Saddened and angry at such waste, she was prompted to take action.

Benedicte began dumpster diving for the tiles and bringing them home. She learned that these tiles were produced by applying coloured powdered marble to a base of concrete through a hydraulic process. The tiles can be up to a hundred and twenty five years old and were a fundamental part of the Catalan Modernista movement which in many ways mirrored Art Nouveau. Antoni Gaudi is without a doubt the Modernista’s most famous practitioner and his still unfinished Sagrada Familia Cathedral is the style’s finest example.

Benedicte decided to start collecting these tiles which soon piled up quickly in family apartment. The idea was clear, she was not just going to hoard them but she was going to give them a second life by making tables, consoles, frames, trivets and related products.

It was then that Mesa Bonita was born.

She personally rounds up the tiles and chisels up to 3 inches of age hardened cement from the back of them by hand, restores the front and treats them to return to the tiles to their original beauty. Then Benedicte oxidises or paints the frames (which are made by local artisans), sets and grouts the tiles. All is handmade, that is for sure!

Benedicte's passion for the tiles shines through in the finished pieces!
Benedicte is super friendly, professional and reliable.
Benedicte speaks English, French and Spanish.

In their own words

I love my rescued Modernist tiles. They’re beautiful. But it isn’t only their intrinsic beauty that motivates me. I want to recycle them – reinvent a new use for the them – and allow people to relive the glory of their past.” Benedicte