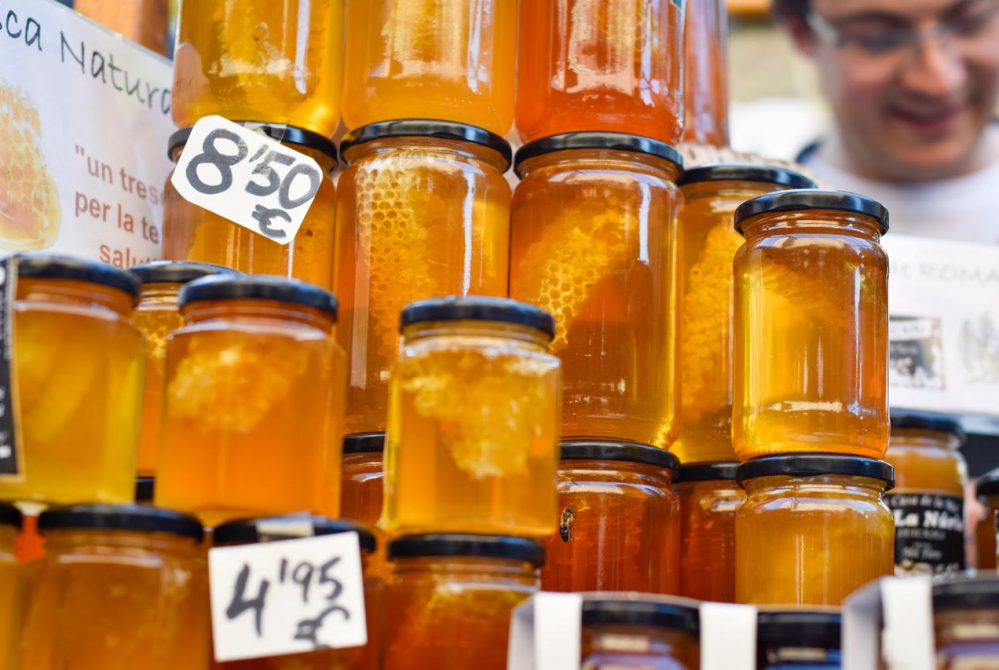 The first annual festival in Barcelona dedicated to honey, BCN Honey Fest, was a grand success. With the mission of educating the public on the importance of the honeybee — most especially her role as pollinator of nearly one-third of all the fruits, vegetables, and legumes that we eat — it was a fun day enjoyed by thousands. Located in Parc de la Ciutadella on the terrace of Castell de les Tres Dragons the former natural history museum, it was a celebratory event featuring gastronomy, art, culture, science, and technology. 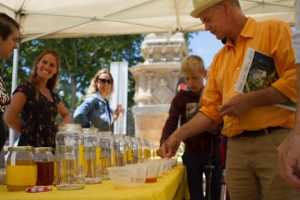 Visitors next encountered a marketplace of stands. Some informative ones included Greenpeace’s #SOSabejas campaign, representatives from the Autonomous University of Barcelona’s laboratory for pollen studies, innovative hive designs by Flow Hive and Open Source Beehives, and a group of kids from Sagrat Cor Sarrià school, whose bee-robot project won the First Lego League prize. Other stands sold hive-derived products: honey, fresh pollen, propolis tinctures, beeswax candles and cosmetics, home-brewed mead, and more. Three attractions in particular afforded a glimpse into the beekeeper’s world: an exhibition of antique equipment, live bees flying within a contained vitrine, and demos of the extraction of honey.

Tasting that freshly extracted honey delighted many youngsters, some of whom also participated in two interactive workshops: making candles out of laminates of beeswax and constructing insect hotels out of wooden dowels and other vegetal materials. To ensure that no one went hungry, a few stands served a variety of honey-infused delicacies: falafels, tacos, paninis, as well as ice creams and a honey-flavored lager.

Throughout the day visitors also learned about apiculture during BEE Talks, a series of short, scientific and cultural talks by experts. Topics included the current state of world bee populations, the connection between bees and plants, urban beekeeping, artists’ collaborations with bees, the medicinal properties of propolis, a network of honey museums in Spain, an upcoming exhibition called Beehave at Fundació Joan Miró, and others. 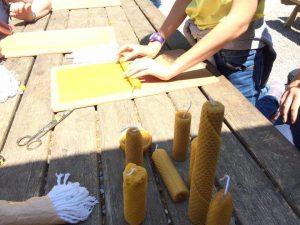 While the inaugural BCN Honey Fest has come and gone, there’s always an occasion to celebrate honey year-round. Thanks to the organizers of the festival, Apicultura Urbana, a nonprofit association charged with spreading appreciation for the honeybee, you can learn more about this tireless winged creature and her sweetest of byproducts, honey.

Throughout the year Apicultura Urbana will be organizing a variety of interactive, and indirectly educational, activities about bees and honey. In the works are a series of formal honey tastings in spectacular settings like boutique hotels and private residences, whereby attendees can sample a few local and international honeys paired with fruit, cheese, nuts, jamón Serrano, even chocolate. Continuing in the vein of culinary indulgences, chefs and beekeepers will collaborate to create honey-infused dinners, with each course featuring honey in creative ways, while classes on cooking and baking with honey will also be offered.

Additionally, from a more didactic perspective, there are talks about developing a theoretical “Intro to Beekeeping” course for beginners, as well as designing an engaging lesson plan for kids, using the fascinating world of apiculture as a springboard for learning about plants and pollination, what it means to work and live in a communal (matriarchal) society, the evolving house chores bees perform in and out of the hive, even mathematics.

Presently Apicultura Urbana is seeking partner schools to develop and implement its learning-about-bees program in English, Spanish, and Catalan. A range of options would be available to schools:

• A one-time visit by a beekeeper, explaining why bees are important via a hands-on (but of course, bee-free) presentation;

• In-school or after-school workshops, whereby kids can make their own beeswax candles or construct insect hotels in order to attract and provide a safe home for solitary bees; or

• More in-depth lessons about apiculture, as described above.

If you think that your child’s school might be interested in participating in any of these potential programs, you can contact Apicultura Urbana/BCN Honey Fest at bcnhoneyfest@gmail.com or Steve Rogenstein at 645.140.732.