Boy on the Edges | MumAbroad

Home » Life » Boy on the Edges 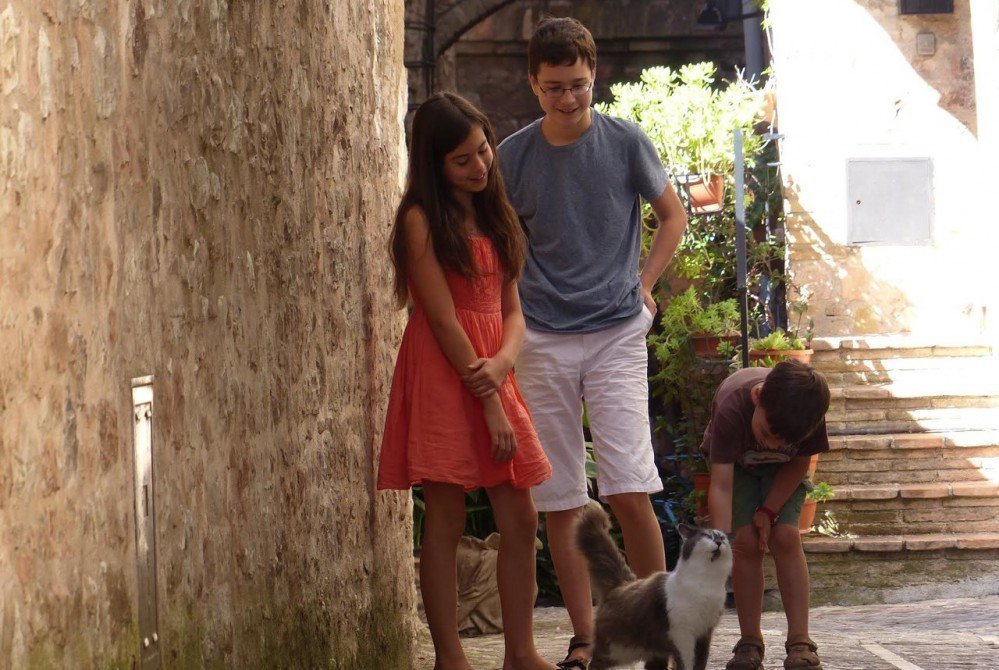 It’s hard to be a 14-year-old boy at a new school. Even harder when you don’t speak the language, and everyone else has been educated together since before they could twirl pasta. At first connecting was easier than Nicolas expected, but over time his novelty has waned, and with it, his classmates willingness to reach across the divide. Also, at the beginning of the school year there were frequent class gatherings at the park, but with cooler weather, there haven’t been any (Italians seem allergic to weather below 20 degrees Celsius). Thus, Nicolas’s sole social outlets are Facebook, Skype, and his younger siblings. All fine in their way, but not the same as laughing with a friend at YouTube videos while inhaling dangerous amounts of gummy candy.

To engage his peers, Nicolas has decided to invite a handful of boys over to our house for some “hanging out” and a movie in Foligno, the nearest city to our adopted hill town of Spello, Italy. This simple plan takes massive amounts of organizing. Partly because at home, Nicolas would invite boys to join him, and whoever came, came. Here, we are tenuous. So the plan shifts and changes to accommodate everyone’s perceived convenience. The simplicity of the final plan belies the constant internet movie research, rearranging and reconfiguring, Facebook chatting, and even a phone call, the most dreaded of expat interactions.

On the day of the gathering, Nicolas is the teen boy equivalent of giddy as he trots down to the negozio to select snacks worthy of winning the hearts of these boys—Kinder chocolate and gummy soccer balls and some sort of bell-pepper-flavored Pringles.

The boys arrive fairly promptly. According to Nicolas, Italian kids stand when a teacher enters the classroom (which stunned him the first time it happened—his head whipped around trying to figure out why everyone was rising out of their seat), so I expected them to at least introduce themselves when they entered our home, but they each duck their heads and hightail it into Nicolas’s room.

I know I’m spoiled, but Nicolas’s friends from home have been his friends since they were babies, or at least from when they delighted shoving the back of matchbox trucks with Play-Doh. So they know me, and when they enter my home, we smile, we say hello, we talk for a few minutes. It’s nice. When these Italian boys immediately walk to Nicolas’s room, I have a huge pang of yearning for our American habits. Or probably just for familiarity.

But I don’t spend too much time pondering this loss because I’m stopped cold by hearing Nicolas speak. I stand breathless in the living room, and listen more closely to my son’s voice coming from his room. I’ve never known my eldest to struggle for language. He speaks with puns, metaphors, and SAT words. It doesn’t surprise me that his Italian is rough, but I hadn’t expected it would be this painful to listen to. As I linger outside his room, and hear him grappling to find words, with false starts, pauses, and stumbles—I realize. This is Nicolas without his language armor. This is Nicolas vulnerable. Keith and I stand mute. Not even listening to what he’s saying, just listening to him earnestly trying.

Bless their awkward-with-an-English-speaking-mother-of-their-foreign-classmate hearts, the boys embrace Nicolas. Literally and figuratively—clasping him around the shoulders and slowing down their speech for him. They are patient and engaged. Unfortunately, the scene changes once at the theater. With a larger group, it becomes easier to overlook him, and Nicolas moves to his nowadays-customary spot outside the circle.

My thinking is that it is a case of bystander apathy—if someone needs help, he is better off if there are fewer people around him. I think the bigger the social group, the more each boy is likely to tell themselves that someone else will engage Nicolas, the poor language-deficient American in their midst.

Observing my child linger on the edges reminds me of standing by helplessly while our five-year-old desperately tried to join the gladiators in training during the Ancient Roman Festival, but hung back because he didn’t know how to be part of the group. Watching my child experience what it’s like to be “other” because of I moved him to another country activates all my knee-jerk parental guilt. I bat away the whisper of surety that that experience with otherness will eventually be good for him, for all three of the children, and really for all of us.

Luckily, Nicolas is quite complacent about his role as guardian of the outskirts. He says he doesn’t take it personally, he understands that they like him fine, it’s just harder for them to communicate with him and sometimes they probably just want to talk without slowing down and using third grade vocabulary. Nicolas reports that his goal is have one successful communication transaction a day. If he does that, he feels the day is successful. So today is a banner day in that regard, and he actually found himself having legitimate fun with the boys.

Sometimes I’m struck by how much is novel, just having our bodies be someplace different. Our ability to comprehend the simplest encounters, our admiration for the tenacity and understanding of our child, and our capacity for feeling our own vulnerability.

*****
Michelle Damiani is an American writer and psychologist. Her book about her family’s life in Italy, Il Bel Centro: A Year in the Beautiful Center, is now available on Amazon. www.michelledamiani.com