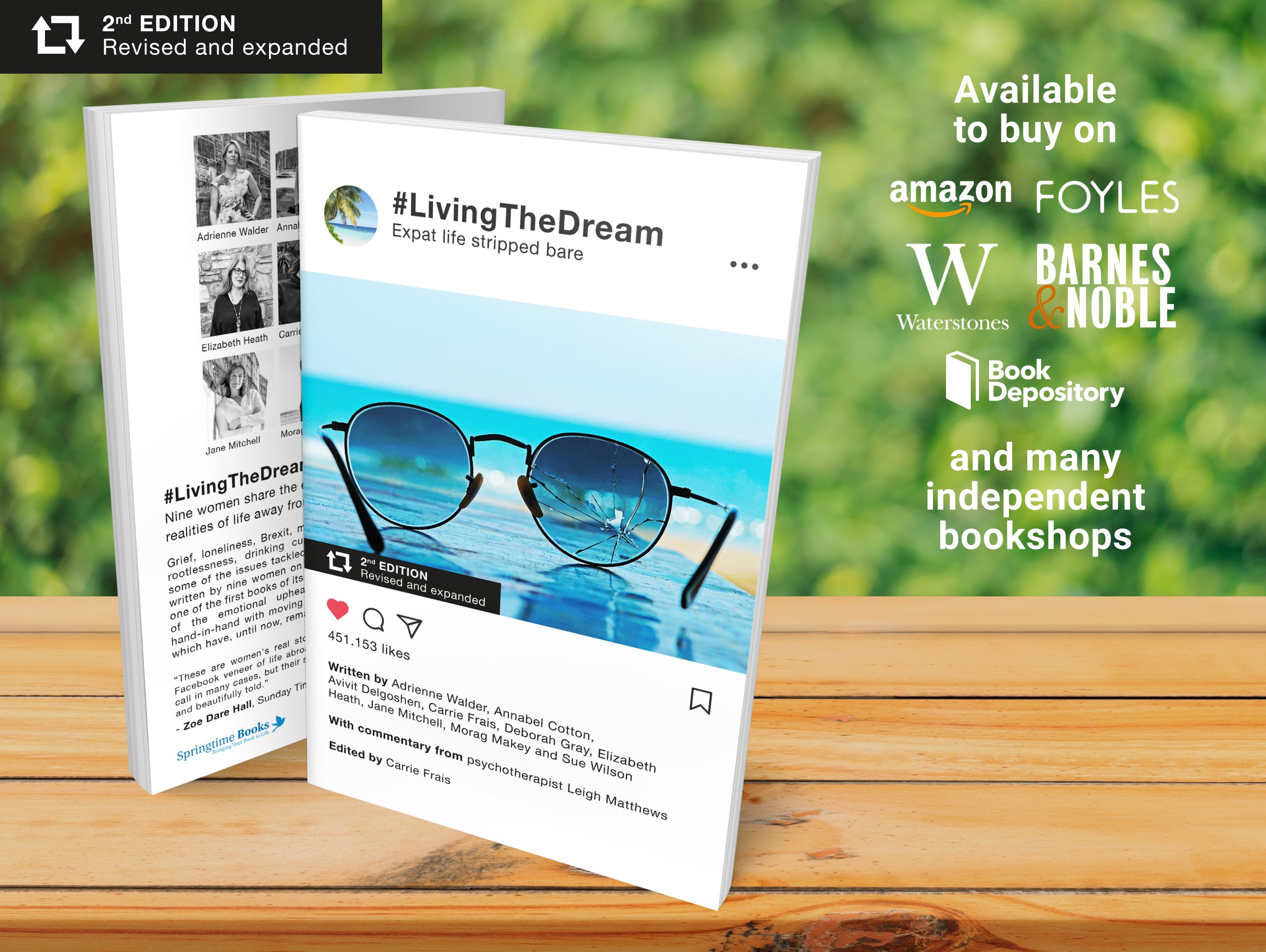 In a new anthology of personal and powerful stories, nine women share the emotional and practical realities of the challenges of expat life away from ‘home’. These brutally honest essays cover the real experiences of women dealing with challenges away from the support structure of their place of birth. #LivingTheDream aims to bust the myth of the perception of a ‘blessed’ life under sunny skies and show the sometimes tougher reality.

The challenges of life away from ‘home’

Grief, loneliness, Brexit, motherhood, identity, rootlessness, drinking culture and integration are just some of the issues tackled in this collection of short stories. Editor Carrie Frais, also the founder of MumAbroad, wanted to give a voice to women living away from their native ‘home’ and reveal some of the emotional upheavals and struggles that go hand-in-hand with their day-to-day existence.

This project came from Carrie’s increasing feelings of isolation during lockdown in Spain, her feelings of rootlessness and a lack of belonging, exacerbated by her own grief and the reality of Brexit. She felt the need to connect, reach out and encourage positive interactions and expose uncomfortable truths about the often misrepresented ‘expat’ existence. She explains, “The women who have contributed to this collection of stories all share the (often) rollercoaster experience of moving away from the country of their birth. We are sometimes viewed as courageous, uprooting ourselves from the security blanket of having one’s extended family nearby to face new adventures and experiences in far-flung corners of the world. Yet, our lives can be emotional, confusing and challenging. When we experience anxiety, stress, insomnia, loneliness, fear or even depression caused by, amongst other things, culture shock, rootlessness, social exclusion, grief or bureaucracy, we struggle with people’s perceptions versus our own reality”

A new interpretation for the term ‘expat’

Carrie wants people to re-consider the way the term ‘expat’ is used, believing that it has “..now run its course, as it retains connotations of privileged, financially mobile western white men and women working abroad, or retirees relaxing on sun-soaked beaches. Nowadays, people are choosing to emigrate for a myriad of different reasons and some of us feel that being labelled an expat can set us apart from our adopted cultures when, in fact, we are trying to do exactly the opposite”.

Each chapter in #LivingTheDream is followed by reflections, advice and insightful analysis by Australian-born author, therapist and expat Leigh Matthews in the hope that those internalizing their struggles will realize they are not alone and may be motivated to open up to friends and family to obtain the support they need.

“Building a life and career abroad is not the same as having an extended holiday. It isn’t always easy to be away from close family and trusted friends and to navigate the challenges of moving to and settling in a new country. And yet, despite the mountains many of us have had to climb, it is still worth it”. Carrie concludes.

Adrienne’s story is about how her move to Hong Kong resulted in her ‘calling time’ on alcohol and becoming a vocal advocate for sobriety.  She moved to Hong Kong from the UK in 2013 after a series of agonising miscarriages.  After a rocky start, she slotted seamlessly into the Hong Kong party lifestyle. Over time, the post party come-down started to outweigh the party high, and she chose to make the life changing decision of going alcohol-free.

Deborah’s story looks at the impact of taking a career out of its original geographical context (in this case, the UK) and why it is like starting all over again from zero. This is further exacerbated if you have chosen to become a parent abroad and is nigh on impossible to do without having a partner who is willing to share the load. The only way to cope is to not take any of it too seriously and always have a back up plan.

Chapter 3 – Married Plus Four: A Trail between Four Countries by Avivit Delgoshen, London

Israeli-born Avivit met her journalist husband whilst working as a TV producer in Jerusalem. Given her husband’s work commitments, Avivit found herself being uprooted every few years to become the ‘trailing spouse’ adapting to new cultures and looking after four children (and now a puppy) via Brussels, Jerusalem (again), Paris and currently London. Avivit candidly shares the experience of feeling ‘rootless’ as well as the endless cultural challenges she faced whilst moving to different countries.

A long-held love affair with the country sparked Sue’s dream of retirement on a Spanish costa. Little did she know that the move would come sooner than expected, or that retirement would look so different from her vision, thanks to Brexit. Formerly disinterested in current affairs, the Brexit referendum turned an aversion to politics into an obsession, bringing with it, new challenges and new skills. Sue now spends all of her retirement campaigning for the rights of British citizens living across Europe.

A honeymoon in the harbourside city of Sydney, Australia was the catalyst for a “sea change” for London-based radio journalist Annabel Cotton.  Moving from one end of the world to the other was never going to be plain sailing; loneliness, guilt and grief all took their toll.  It was raising a family in Australia that fostered a connection and affection for the place, coupled with an acceptance that “home” can be in more than one location.

This is a story of leaving home and finding home, examining what drives us forward and pulls us back.  With the restlessness that compels a person to keep moving, comes the rootlessness that results from never staying still.  It’s the constant mental and emotional struggle of an expat, but resilience, plus a multitude of memories, is the reward for a life less ordinary.

The honeymoon phase with Italy for American writer Elizabeth ended soon after her real honeymoon was over, and the reality of her new life in Umbria quickly set in. She writes about friends, family and culture, and the long game of adjusting to her new home, navigating unfamiliar social terrain and building relationships as the straniera in her small Italian town.

A British mother shares the emotional and practical challenges when confronted with the illness and subsequent loss of her parents whilst living away from ‘home’ in London. Carrie searches for a sense of belonging in Barcelona as she watches life as she once knew it crumble away.

Divorce meant the end of Jane’s family unit as she expected it to be, the end of ‘normality’, the end of an era and the end of her being part of a couple. It took time, therapy and a lot of tea to (re)discover her identity and to realise that divorce does not have to be the end but in fact is the beginning of a new chapter in her life in Barcelona.

The power of honest storytelling

Especially in the COVID-19 era, expat lives are being put under increased pressure, and many people are feeling isolated and disconnected. Carrie Frais hopes that the honest stories told in this book will encourage people to not feel alone and be more open about their struggles. She hopes it will inspire people to share their own stories with their friends and family to enable them to obtain the support they need.

Find out more on www.carriefrais.co.uk/books/